I returned home the other day to find that both my hot water heater and my pressure boosting pump had failed. I still had flowing water thanks to my gravity feed system, but it is low flow, low pressure. It also meant I was back showering from a bag with water heated on the stove. 2.5 gallons of bathing pleaure. Just like the good old days in the double-wide during construction. 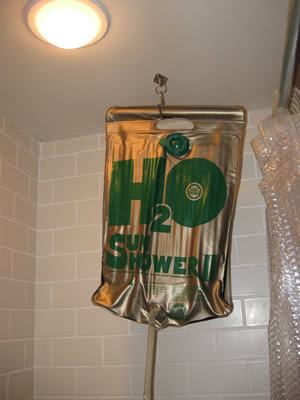 As a reminder of the need for redundancy, I've now permanently
mounted a pad-eye in the ceiling for any future failure. Be prepared,
the boy scouts say.

Both failing after 4 years was unexpected. More so the hot water heater, a Seaward 20-gallon model that had always dripped from what I assumed was the pressure relief valve. But an autopsy on the unit showed a failed weld in the tank. Perhaps this is why West Marine, a well known boating retailer, stopped carrying them.
The good news is my "controlled leak" system worked perfectly and there was no damage done.

Unable to find a replacement 20-gallon tank in a pinch, I decided to test the limits and try an 11-gallon model from Kuuma. So far so good, but I'm not sure back-to-back showers are possible, but the recovery time is very short.

The pump was not so much of a surprise, but unlike the water heater, it had increased in price about 50% to near $400. I'm not sure why it didn't occur to me earlier, but I still had the Shurflo 120V RV pump (only $110) that I'd used to cobble together a water system in the trailer. I'd already ordered a replacement Grunfos MQ, but I decided to plumb-in the Shurflo as a backup. 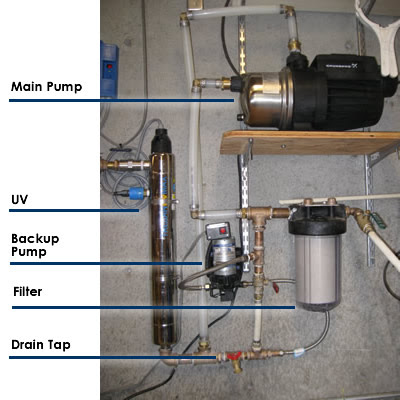 New configuration.
The Shurflo, inspite of its diminutive size, performs nearly as well as the Grundfos and has the added advantage of being lower power and thus probably could run off the batteries in a power outage. 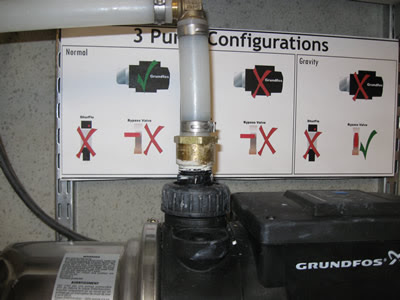 I made up a sign describing the now 3 modes of operation and the correct
valve position for each: Normal (Grundfos), backup (Shurflo), gravity. 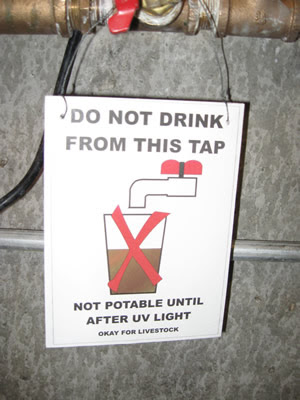 This new arrangement also enabled me to install a drain valve at the bottom of the system. Being before the UV light, it's not technically potoble, thus the sign.