The house is performing well. During a recent cold spell, the house would drop from 70 F to 62 F overnight with no heat source despite exterior temperatures in the 18 F range. I'm heating with wood scraps left over from construction. Mostly cedar. I estimate I could heat the house with one cord, and certainly not more than two cords in a season. Other houses of similar size in the area might use up to 8 cords of wood a season.

The passive solar element has also had a workout. With a cold snap with clear skies, I've had the house heat up from 62 F to 68 F with out any heat input other than the sun. 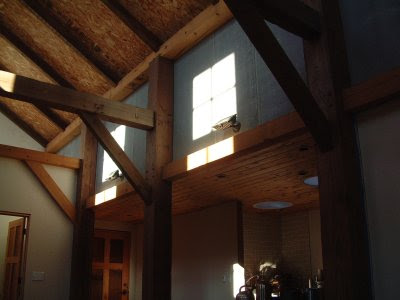 The roof angle is 30 deg., the winter solstice sun angle. Shown here the noon sun from
the four upper windows casts light on the concrete panels. Heating them so they can
radiate heat later.


The house is also nice because the heat is uniform, no blowing vents, and there are no drafts.
Posted by Marc at 10:40 PM No comments: 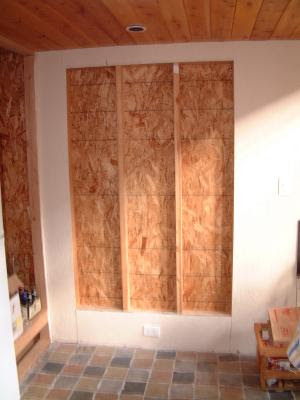 The pantry is to be fitted between studs in the kitchen wall. 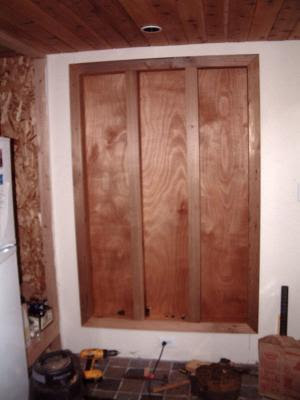 Framing is made from old cedar and treated with linseed oil
giving it its dark patina. 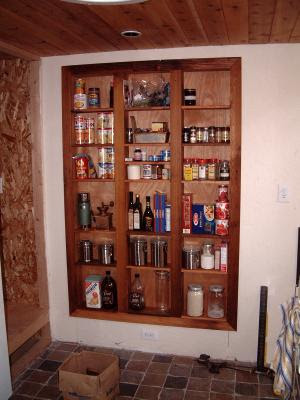 In keeping with the open plan of the house, the pantry is open
and accessible.
Posted by Marc at 10:32 PM No comments: