I hated the upholstery of my sofa since the day it was delivered to me around 1992. I contemplated recovering it immediately, but I had chosen the pattern myself and so I felt I must live with it. 15-years on I decided it was an eyesore in my new home and the time to reupholster it had come. 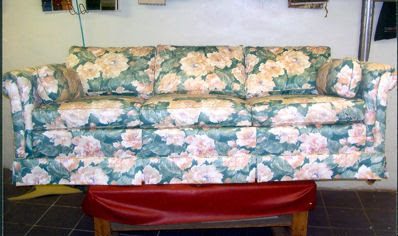 These photos by Alamo Upholstery.
Other than the fabric I liked the sofa for its design, size and comfortable. This also seemed to be a good opportunity to find a good, sustainable fabric. 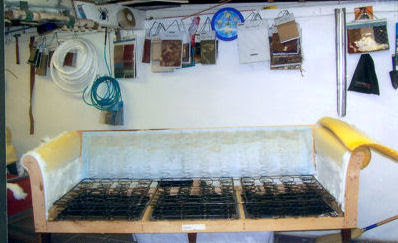 The frame is strong and in good shape.
As it turns out, it's very hard to find "green" fabrics. Reupholstery shops in the area had no idea, and weren't really interested in new products. As I learned, they also markup the fabrics they sell 100%, thus they have no incentive to have the customer bring in fabric. Here are some links to some fabric suppliers:
I chose a "cradle to cradle," infinitely recyclable fabric from DesignTex. 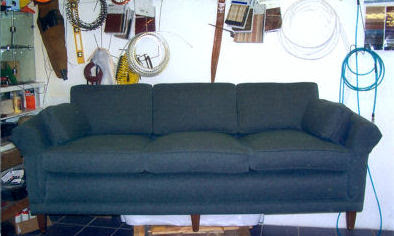 This fall I finally finished the water shed building that houses two, 1350-gallon tanks. Still needs work on the inside. 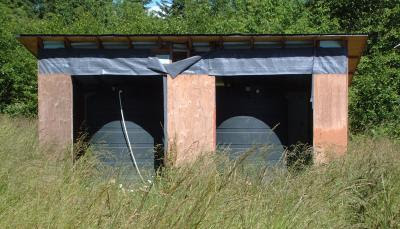 An early shot from some years ago. 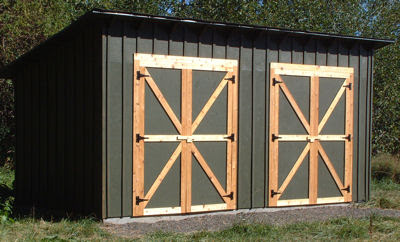 The finished product.
Posted by Marc at 7:36 PM 1 comment:

In truth this was a great flood; by that I mean we had a great time. Many of us, not here for the '96 flood, now have bragging rights even though we had electricity and warm weather the whole time. And while we did load our cars when rumors of a crest of 2-feet above '96 circulated; and while we were locked in by two flooded bridges; and while we could only call locally, in the end the water reached 6" to a foot below '96 and no one was hurt.

Auerhaus had a great view of the proceedings and virtually ever neighbor dropped in to have a look. It was a busy, festive day.

The drawer is a perfect fit. 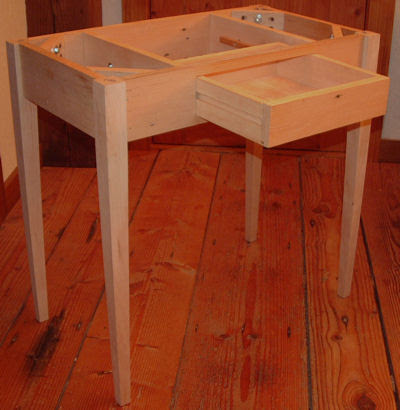 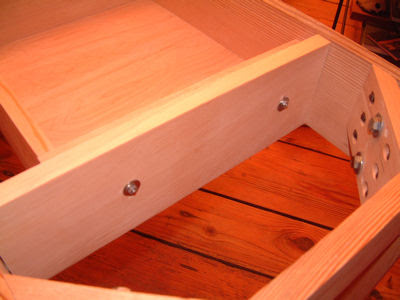 Because the tolerances are so tight, I made the drawer slides adjustable.

The only glue used was to secure the drawer face.
Posted by Marc at 6:23 PM No comments:

I have an old bread board that I thought would make a nice writing table. I wanted a drawer in it, but I also wanted the drawer face to be the piece cut out for the hole. I'm sure many have figured this out before me, but it was a revelation for me. 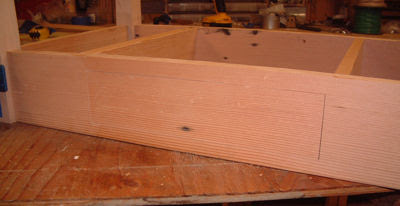 Yes, this is all the same piece of wood.


Not wanting to make the legs I found some ready-made at Classic Designs by Matthew Burak.
The aprons are from salvaged, old growth, vertical grain fir. For the old-timers this was just lumber so it has some nail and bug holes, and like them it has character.

It is also my first doweling experience and it works great. The blue tape was to remind me which faces NOT to drill. 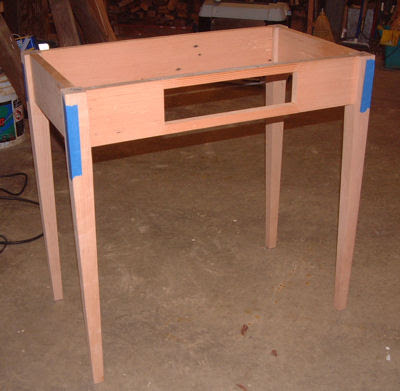 A preview with the top. 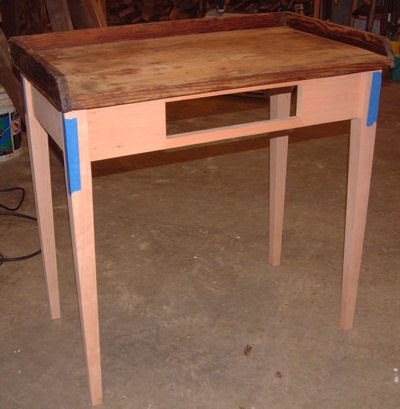 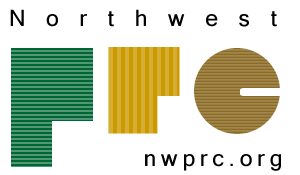 On September 25th, I learned that a Palomar proposed route for a 36-inch natural gas pipeline would transect my 60-acre farm. It is hard to convey how upsetting this is in a way that will make others feel equally disturbed. I know this because, I will confess, when I thought the pipeline would travel two-miles to the west, I was not as upset. “Not in my back yard? No problem then.”

What makes it so visceral that I am not eating or sleeping well?

Part of it is the piercing of the illusion that your property is inviolate. I was intellectually aware of this as a former planning commissioner in two states and one who is aware of the Fifth Amendment’s “just compensation” clause. But I will assert and confirm that nothing prepares one for the emotional impact of being stepped on by Godzilla.

Part of it is fear of the unknown. Will the pipeline leave a visible and ugly scar on the landscape spoiling the view? Will I feel the same sense of peace and tranquility that originally led me to this bucolic setting? The same sense of privacy when a corporation has license to traverse my land at any time? Will my property, part of my retirement plan, be reduced in value beyond the formulaic compensation of eminent domain?

Part of it is intensely personal. It is the height of irony that after spending 4-years of building a low-impact house (www.auerhaus.org), cleaning up and restoring a neglected farm to productivity, and doing everything possible to reduce my use of fossil fuels to the bare minimum, I find I am to become part of an IV-drip to a hydrocarbon addicted California (the place I tried to escape from).

Part of it is intensely personal 2. I am in the early stages of Parkinson’s. I may have only 5 to 10 years before I will be forced to leave the farm I love. I had planned to spend them in peaceable enjoyment of my home and property. Now it seems, even as my ability to do so wanes, I will be spending time researching LNG, attending meetings, possibly suffering a couple of summers of a massive construction project, and living in a general state of anxiety.

So call me a NIMBY, but do it with some sympathy and some respect. The bullet I take might just as well have been aimed at you.