I arose this morning to the sound of rain. Padded across the wood floor, over the tile and into the kitchen. I lit a fire in the stove, and threw in a few chunks of wood. While the water heated up, I ground coffee by hand in the coffee mill. About 30 minutes later the coffee was perking, and soon after I had my first cup of coffee accompanied by English muffins toasted directly on the stove top.

I carried him by hand in the cat carrier the 200 yards to the new house, and set him down in the living room. He quickly emerged and checked the permiter several times, howling all the while. He returned to his cage as if it were some magical portal, and if he only went through it again, he would return whence he came. 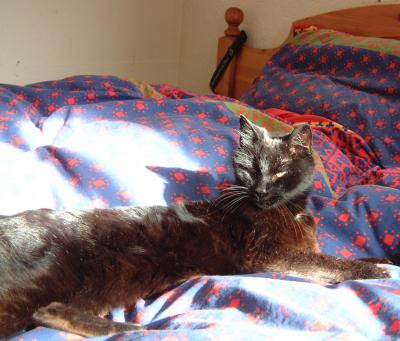 
After a while I left him. When I returned he was sleeping on the bed. It will take him some time to adjust, but it's a far, far better life for both of us.
Posted by Marc at 11:32 AM No comments:

Today I got a verbal okay to move in. There is a short checklist of items to complete before final, but for now I will never sleep in the old manufactured home again.

It's a year and one month to the day since groundbreaking, but really over two-years since I embarked on this project.

I celebrate by spending the evening on my new porch. For an instant I thought I saw a forest fire or an emergency vehicle in the opposing hills, but it was only the moon's big orange face rising through the fir trees. I watched him ascend as I sipped some fine Portland whiskey. The silhouettes of a few deer moved across the lawn not 30 feet away. I stood for a time at the deck rail. I could hear their munching as they pulled on the new growth. After the moon had risen in full, and his face calmed to luminescence, I retired, snuggling under the layers of down, the clean night air rushing over my face, and the moon shadows projected on the ceiling high above me. The house snaps and creeks as the timbers cool and gain moisture. A new house with old bones telling stories of another life.

Today I found out that my water tested potable. I'd been drinking it for a week anyway, after having shock treated the lines with chlorine and then activated the UV light. You've got to have faith.

Always willing to try new suppliers, I chose Coffey Labs in Portland lab instead of the usual one used around here, Alexin. Maybe Coffey is used to dealing with professionals who don't need a lot of hand holding, but if they are going for home testers, they need some work. First they forgot to send my bottles, and I had to email and remind them a week later. Then the test bottles they sent came in a makeshift box, with a foam liner. No testing protocols were given, other than to keep the samples chilled in ice during the trip back. They didn't even include a return address label.

Despite all this, I managed to get my samples double-bagged and sent overnight, apparently without leaking, and arriving at the required temperature.

Finished with a 4:1 mix of linseed oil and turpentine. 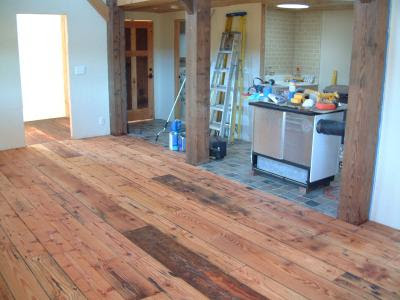 These photos don't convey the amount of color variation in the boards. They range from a red like redwood, to as dark and smooth as walnut. They are all quite distressed, especially on the outside wall edge with plenty of worm holes. Not much sign of termites or powder beatles. I wonder if I'll hear chewing at night? 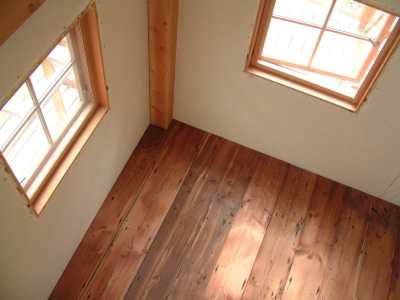 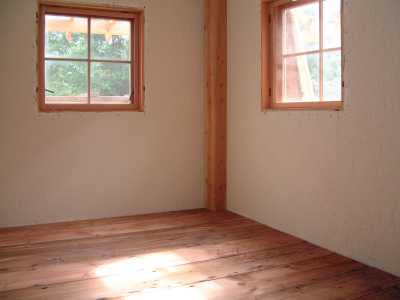 The flooring I've put down thus far came from the shop and the process of recovering them is already detailed in one of my blog entries. Planing a board down that much (1/2") to dimensional size is hard on the equipment, inefficient and time-consuming.
Most people are familiar with the handheld box planes used to shave a few curls of wood off of a door edge to get it to fit. Even then, depending on the wood, it can be quite an effort. One would never use one of these planes to true-up the surface of a board. Along comes industrialization and the marriage of very sharp blades with high rpm motors, and all of a sudden it's possible to "plane" off the surface of the board. About all it has in common with hand planing is the name and the idea of removal of material in small increments. Otherwise they are totally different. 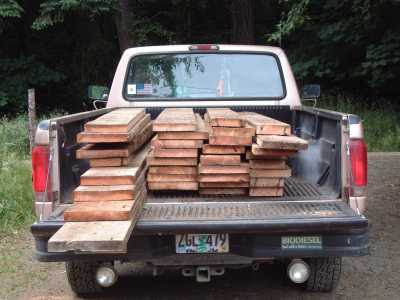 Barn planks trimmed and loaded on their way to being re-milled.
This is perhaps only 200 square feet of flooring. It takes up a lot more space and
weighs significantly more than a laminate or pre-finished floor.
It was hard enough to plane down the shop boards, but the boards that were in line to be used next came from the old hay barn. I'd only taken up a third of the flooring, and this portion was in the feed stall area. The boards were fascinating. Along the edge of the manure trough the boards had been contoured like some irregular Lilliputian coast line. The wood planks had started out 2" thick, but at the "ass" end they had been smoothed down over the years to 1-1/2" or less. The knots, being much tougher, remained uneroded, near their original height. I was taken by the gentle, natural looking undulations in the surface. It occurred to me that they would look great in the loft, where I could polish up the edge, place it facing the living room side and leave it exposed. It would be unique in my experience and a tremendous tie to the former structures. For this purpose I had removed the planks and labeled them so that each edge would line up with the matching neighbor.

Parenthetically, I used Roman numerals to designate the boards. I was forced into it by having only a nail as a marking tool. It was easy to see why early numbers were so linear in form (I, V, X, M). It's easier to mark in wood and stone with primitive tools than, 2, 3, 4, and 5 are with a Sharpie.
Unfortunately the pile of lumber had these portions on top, and so I was forced to cut the tails off to make regular floor boards. Still, I might be able to achieve some of this effect with some boards that have these features on their entire length that I have set aside.

The pile of lumber had been sitting for a year under a tarp. It was "stickered" meaning it had sticks between each plank to allow air to circulate. There must have been around 50 planks in the pile. When I removed them they were dry as a bone. Much drier than the shop planks that although kept in the basement, were not stickered and were substantially wetter. In spite of this, these planks weighed quite a bit more. They were all in the 12 to 14' length range, shorter than the shop planks, but there were more 12" wide ones.
Since these were in the "manure rich zone" of the barn, they were themselves manure caked. The drying process helped dry this too, but there was still a lot of organic matter on the surface. This kind of debris in the top layer dulls planer blades in a few passes. This along with the knots, and their general hardness could cause me to run through $35 sets of planer blades pretty quickly.
All-in-all the way to go is to have them remilled. That is, cut with a band saw to remove nearly all the 1/2 inch at one go, then planed just once. I don't own a band saw, so I arranged to have Tyler Bond, the person who has cut all my cedar for the deck, to do it. 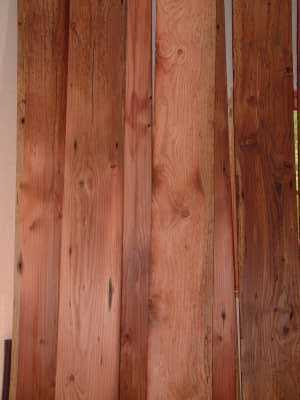 Planks after milling.
In the meantime I spent the day pulling them off the stack, trucking them back to the house. Cutting off the bad ends to about 8' in length, removing missed nails and running some really bad edges through my table saw to create a new edge. If all goes well, the bedroom will be made up of thirteen 12" planks, and the den made up of more random widths. But the planks will span the whole 8' with no other seams. 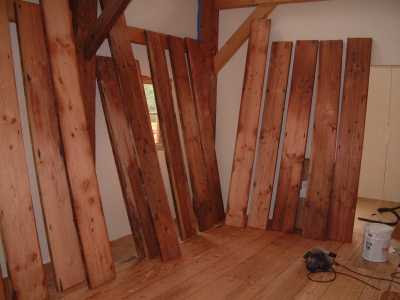 Planks lined up for selection.

One of the things I'm most proud about in the house is the paucity of unusable construction waste. To be sure, there are a lot of wood trimmings, but I intend to burn most of them, and re-use the larger bits. Still, managing where to put all this material is daunting. Especially the salvage lumber. Simply trimming a couple of feet off some 2x12s leaves a pile of lumber that has to be stored neatly some how. This has proven a big challenge, one I've not yet mastered. The piles of such debris from the barn razing last year are now becoming impenetrable blackberry thickets. Turning them into neat cord-stacks of future firewood will be a project in and of itself.
Posted by Marc at 5:47 PM No comments: These stairs are as steep as legally possible in Clatsop County. The bathroom door is 28" wide made from fir and old-growth cedar.
Finished with boiled linseed oil.
Posted by Marc at 9:34 PM No comments: 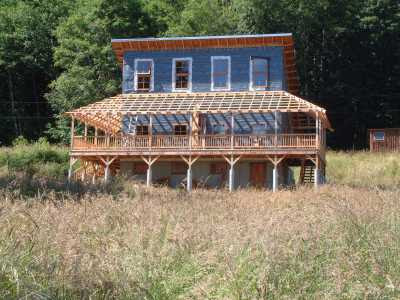 The flooring is started. It is the floor salvaged from the shop on the north east corner of the property that my brother Paul and I took down two years ago. The planks are 8", 10" and a few 12" in width, and up to 16-feet long. I planed them down from 2" thick to 1-1/2". If I had it to do over I would have them milled in half, yielding two 1" planks and exposing the cleaner center. The floor looks great, but I could have used twice as much flooring. 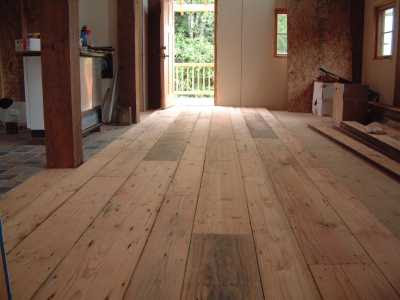 Mostly fir with what I think are a couple of spruce boards. The floor is put together using a biscuit or plate joiner. A very cool tool.
Posted by Marc at 9:18 PM No comments: