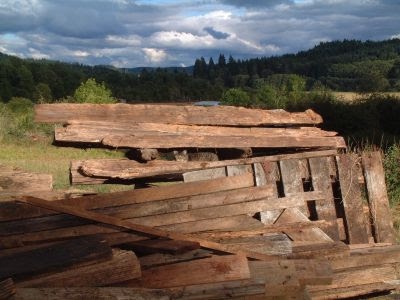 Zupa peers out from the pile of wood.

DAY 1
I first saw him under some planks I was moving to make room for some firewood racks. I had retrieved 3 piles of scrap lumber from the barn deconstruction and heaped them at the foot of the driveway with some other scraps. Now as I committed to the task of cutting, splitting and stacking the material, I lifted the oldest, sun-bleached board from the ground. A napping snake looked bewildered then turned and slid away into the pile. I bent to my work, but now the pile of wood had been turned into a giant game of pick up sticks. Each moved cautiously so as not to crush the serpent. 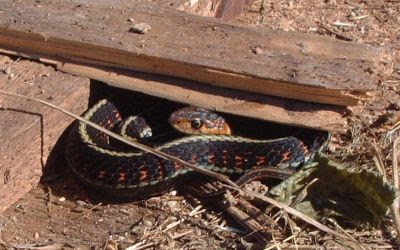 Found
DAY 2
I was making good progress, but I felt bad for disturbing the snake's habitat. I could see why the long, narrow channels of the lumber were ideally shaped for the sinuous movements of a snake, while providing plenty of cover and lots of shade. I was captivated watching him move gracefully, elegantly through the timbers. It had been a very hot summer, with no rain in a month and days over 100. I decided to try and give him some water. I located him on the 6th "floor" resting quietly. I placed some water in the shallow, screw-top of a container. Gingerly I placed it down on the plank within a foot or so and stepped back. After a seeming eternity the snake became active and started to move forward its head moving like a blade of grass in a gentle breeze and floating a millimeter over the surface; its tongue probing the air. It came to the dish of water and after determining its potability dipped its reptilian head in and gulped down some water, and then some more. I was quite pleased.

That night I looked up the type of garter snake he might be. Turns out to be an Oregon red-spotted garter. The three yellow stripes, the scales and the uniformly spaced red markings, and the dull finish of his surface make him look like a fancy boating rope. I determine to call him curly. 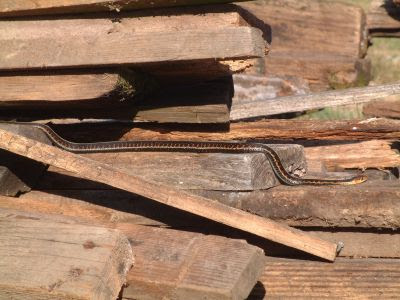 Day 3
I discovered during my research that garter snakes love worms. Makes sense. Slow moving, all protien and no bones to regurgitate. I have a hard time finding a worm in the dry soil. One small sample is all I can muster after 5 minutes with a pick and shovel. I rush the small sample over to Curly and lay it out some two feet away. Curly moves slowly and deliberately, taking few chances. Before he can reach the worm it has wriggled off the board. I run into the house and return with a small clean jar. I place the worm in the jar and rest it on a board. Curly is skeptical, but moves forward. Scenting the worm he becomes more animated. He moves around the right side of the opening. He can see the worm. He wants the worm. But he doesn't understand glass. He retraces his slither and finds the opening. His nose is on the worm, his tongue flicking confirmation. Then gulp, gulp, gulp. The worm is gone. Curly licks all the surfaces looking for more. I'm elated. 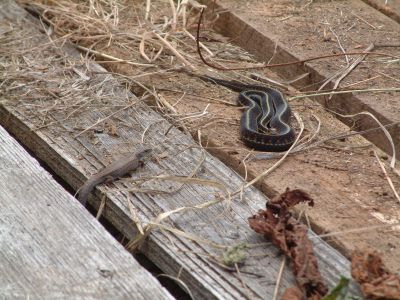 The lizard's heart stops. Curly is motionless. The lizard finally moves, each limb ticking forward
no faster than an hour hand. In the end Curly decides he is too much of a mouthful, and lets
him pass.

Day 4
I'm awakened early by the mad call of crows. It takes some time to come to my senses. I lie in bed listening to the commotion. Finally I peer out through the window, through the rising mist, and to a pile of old, cedar fence posts near where I'd been working. Two crows natter away atop the pile and one has a long, thin object in its beak. A snake I think. Curly I'm afraid. I sink back under the comforter sad to see the little guy go.

Working on the woodpile is easier without having to worry about a snake. Curly must have lived under the few planks that had been there a year as I find several shed snake skins of varying sizes. I wonder if by feeding him I had made him less cautious and been in some way a part of his demise. At around 2pm Curly slithers out from under some boards. I'm so relieved. If he was the snake being tossed about by the crows he shows no sign of it. I'm so happy I dig up 3 worms for him. He devours them in quick succession. But the third one gets stuck in his jaw crossways. It is only then, seeing him thrash around, his miniscule limbic brain working at full capacity at one purpose that I see him as the ruthless killing machine he is. Still, when he's not eating he's cute which could be said for a lot of people.

I also imagine what it must be like to be a snake. Forget opposible thumbs. Snakes have nothing opposible at all. Jaws on a stick. I guess they don't itch. 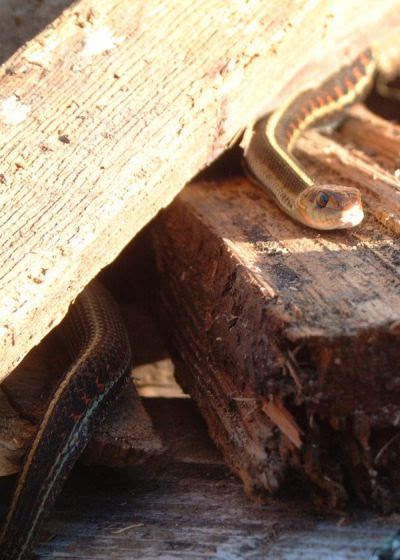 Snakes can be in two places at once.

Day 5
I have to herd Curly into his new home, but he's not cooperating. I've left a couple of broad planks on the ground facing south and a bowl of water. I'm down to the last pile and it's about to fall over. I want Curly out of there but he is dodging me. At one point I have him where I want him, but I turn around to cut some wood and he dashes back. To hell with him. I work down through the pile. At sunset I lift the last plank, and like magic, he has disappeared. 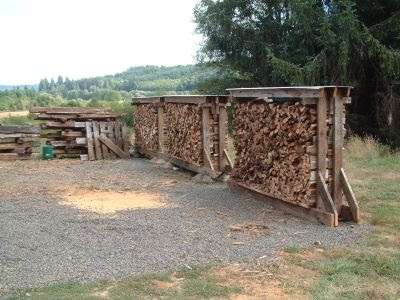