It has been an abnormally dry year. While California and British Columbia got soaked, Oregon remained sunny and warm. But on the east side of my new house a river runs through it.

On Friday afternoon, after the work crew had finished prep work on the porch footings, I decided I needed to really get after digging the new footing drain. Now that the porch footings were located I could see exactly where the new drain line needed to go to avoid them.

I wheeled the tractor into place and started digging with the backhoe. It was mucky, but I was pointed downhill and I figured I could my escape just by coasting down to the bottom of the yard, making a right at the burn pile and I then would be on relatively dry ground again.

After repositioning the tractor several times to dig the 30 foot long trench, I was done. I mounted the drivers seat, reached back to pull on the two levers that retract the hydraulic, stabilizing outrigger arms, turned my head south and started to exit the bog. After 10 feet I came to a stop and began to sink. I looked back, and the outrigger, on the opposite side that I had leaned to, had failed to retract. It had been stuck by the suction power of the clay, and dragged through the mud like an anchor. Whether or not this was the actual cause of my getting stuck, I will never know. 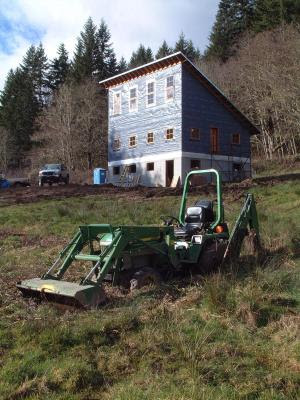 I tried using the bucket to raise the front wheels, I rocked it back and forth, I checked that I was in four-wheel drive. But the tractor just kept sinking, eventually settling at the axles. 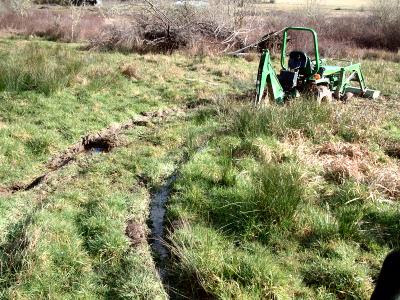 Making my own stream


Where my tracks had been, water now flowed freely down and pooled under the tractor. It was getting dark. I decided to abandon the effort that evening. I was gone the next day, but swung into the driveway in the early evening upon my return just to make sure it hadn't sunk any farther. It had not.


Today, I went out to raise the Deere. Using the hydraulic outriggers, the bucket and lots of large lumber I was able to raise it up. My plan now is to wait till Tuesday morning when it is supposed to be below freezing overnight and hope that hardens the ground a little. I have also dug a channel in the mud above the backhoe that is diverting the water around the tractor. I could have a neighbor pull me out with his own tractor, but where's the challenge in that? Plus, instead of the ignomy of getting my tractor stuck in the mud and having to be towed, I will be the guy who managed to get a tractor stuck in the mud up to the driver's seat (all tall tales grow taller) using nothing more than his wits and his Leatherman. Am a man or am I a mouse? We will find out in short order.